Know the feeling when you use a tool that "just works"? instead of feeling like you're wasting time and growing frustrated, you end up being more productive?

ArviZ developers have the same expectations for the Continuous Integration pipeline It should "just work", so the focus on stays on writing new functionality for users, not feeling frustrated with flaky infrastructure.

Unfortunately things didn't go as planned. Our Continuous Integration (CI) experience was frustrating, not just for us, but particularly for volunteer contributors that were submitting great code only to have the CI process abort with an obscure failure message. The CI process needs to be smooth, partly because the code should be tested and verified, but more so to avoid wasting contributors time and ensure they have a great experience. After all, the most finite resource is people's willpower, time, and enthusiasm. 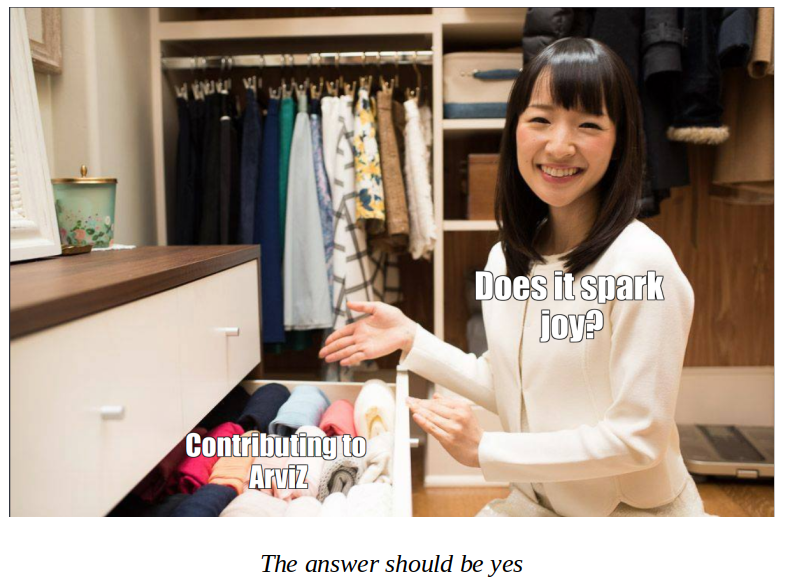 To keep developers joyful we've moved to a Docker-based Continuous Integration system. In this post, I'll detail the issues we were having with CI, why we started using Docker in our CI, general instructions on how it all works, and along with a grab bag of tips.

The tale of 5 deep learning frameworks, a local machine, and a remote virtual machine

While installing one deep learning framework can be a challenging experience, installing five at the same time can be perilous. To ensure ArviZ runs seamlessly on widely used Bayesian learning libraries, we need to test against all of them, which means we need to install all of them.

In the event of issues, debugging locally is painful enough, but when an error appears in the CI process, the developer has little access to see what went wrong. Debugging amounts to lots of print statements, git commits and 15 minutes of waiting to see what happens. It's especially maddening when local testing passes but only the CI virtual machine is failing.

This is the situation we were facing with plain TravisCI. Code that worked great locally, suddenly was failing when contributors made pull requests. This in no way is TravisCI's fault; TravisCI is a great tool that we're still using, the fault was residing somewhere between the operating system, the five C level libraries, Python, and ArviZ.

After a couple months, we switched to Docker-based testing on TravisCI for one simple reason, the developers' coding environment would be an exact replica of the CI environment. This meant that any CI issue was now locally reproducible and locally solvable.

Alright, enough with the talk, on with the details, how is it done?

Let's talk through each step, one by one

The first step is deciding what you want your environment to contain. In general you'll want your container to have all the tools needed to build and test your code, and ideally to be as minimal as possible. We'll use the ArviZ dockerfile as an example.

The first line is the base image.

It's typically recommended to start with a minimal image, like alpine. However, at ArviZ we found it much simpler to start with an environment that already had some things set up, and just work from there. This means the image isn't as minimal as it could be, but we're not shipping containers "at scale" so this tradeoff was worth it.

Next, we setup arguments and environmental variables

The choices are intended to allow some flexibility in what gets installed in each image. For ArviZ we test against different versions of libraries and we didn't want to create a dockerfile for each. By setting the ENV variables here through command line arguments we afford some flexibility

After this, we actually start installing things

Installations happen at two levels, some are at the container level, and the rest are in the Python environment. We choose to have a separate create_testenv.sh script because this allows users to run it outside of Docker.

The next section of the file copies the ArviZ code base and removes any cached files.

The last section clears any remaining cache files and sets the default command of the container to execute tests. There is something weird with the source /root/.bashrc which I'll talk more about in the general tips section.

The next step is configuring TravisCI. Luckily, this is not too hard. Adding the lines below will install the latest version of docker-ce.

After that you'll be able to build an image and run tests, capture code coverage, generate documentation, or whatever else you'd need.

Step 3: Fix any integrations that may have broken

One downside of testing in a container is that isolation is great, until it isn't. We found that some of the tooling that integrates with TravisCI no longer worked , such as travis-sphinx, and coveralls,

The trick here was to generate the documentation and coverage files in the container, but ensure they were available in the TravisCI environment by using a bind mount. An example can be found in the .travis.yml file.

When the files are present in TravisCI file system, the integrated tools can deploy the docs and coverage just as they had done it the past.

There were some gotchas that required some experimentation which I'll document here.

TravisCI is picky about semicolons, spaces, and newlines in its .travis.yml file. If you run into odd errors, be sure to troubleshoot these first.

Not all bash shells are interactive, and when they're not, they don't invoke a .bashrc file. This is why you see source /root/.bashrc frequently in our .travis.yml files. This command loads the `.bashrc. file before executing the next command. While this workaround isn't the most elegant, it did work for our purposes. However, if you know of a better solution, please let us know through an issue or a pull request! We would greatly appreciate it.